I hope you’re doing well. We just recently celebrated the one year anniversary of Barley’s adoption! I want to thank you so very much for the difference you’ve made in his life and ours. With your help, he has really transformed over the last year. He used to run away from treats tossed in his direction, and now he delights us with his athletic treat-catching ability 🙂 He used to be startled and back away from any new object in the house, and now he’s excited to sniff and investigate new things. I could go on and on 🙂 Probably my favorite change is that he’s become a lap dog. He stretches out on our laps every evening on the couch and takes a nap 🙂

When we first adopted Barley, we didn’t understand what it meant to be a “shy” dog. I’m astounded now when I look back and read what the shelter wrote about him: “He is one of the nicest dogs to come along in a long time. He’s sweet with other dogs and gentle with people. Nothing seems to ruffle his feathers.” There was no mention of fearfulness, and we didn’t know enough to recognize it when we first met him. We are so grateful to you for giving us the skills and understanding we needed. We know he will never be a “normal” dog, but we now feel equipped to handle his various neurosis 🙂 Training him has become my favorite hobby!

Thank you so very much,
Kaila 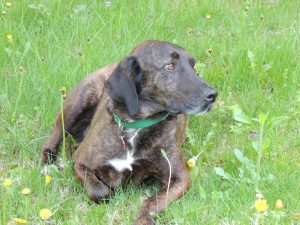