It’s the New Year and most people are waffling somewhere between excitement about a new year with new opportunities…but…also feeling some post holiday hurt due to eating too much, spending too much and being generally fried. The last thing you want to think about is training your dog. At the same time, you had resolved to finally deal with the issues once the holidays were over and, well, now here we are. It’s time to stop procrastinating. There’s a special treat at the end of this blog for those of you that have been putting training off. 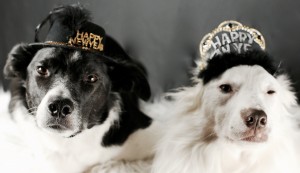 I’m here to tell you that it’s not as bad as you think. It won’t be horribly hard or time-consuming or awful to train your dog and repair whatever might be broken. In fact, you probably know a lot already and just have to figure out where and how to apply it.

When I do consultations, I hear these statements almost every time:

“Wow, I never thought about it that way. Makes so much sense.”

Now, obviously, not every behavior and training issue is easy breezy but, in truth, many actually are kind of easy. Dog training can be amazingly complicated, artful and dynamic but at the end of the day it’s still not rocket science, folks. 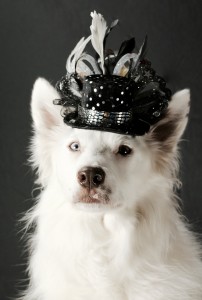 Wearing her finest hat for the holiday. Training is the coolest!

Today I am going to give you one exercise to do that can change everything. It can improve your relationship with your dog, improve his general behavior, improve his training and actually, practically, make a difference on a daily basis.

Are you ready? You will need the following items: your dog, a house with stuff in it, and you. Got all that? If you want to get fancy you can add in some rewards for your dog like toys or food but you don’t have to. Seriously, it’s that easy.

OK, so now I want you to think back to Dog Training 101 and the Leave It exercise. You probably used a treat, either in your hand or on the floor and rewarded your dog after he successfully left it alone. Don’t remember or never went to Dog Training 101? No worries. It takes 2 minutes to learn how to do this. There are a few different versions out there – Doggy Zen, Susan Garrett’s It’s Yer Choice, or Sophia Yin’s Leave It. Here is a link to Garrett’s version. They are all basically the same thing – impulse control games.

So much training falls to the wayside because owners don’t find it practically useful. Who cares if a dog can leave a treat alone in your hand? Who cares if he can stay while you walk around him in a circle? I get it. Being able to do tricks and/or be a superstar in class isn’t helpful when the real issue is that he’s stealing food off the counter, digging around in the trash and jumping on visitors so crazily you are speechless with embarrassment (not to mention out of breath from pulling him off).

You can make major progress on fixing those issues with this exercise. No kidding! 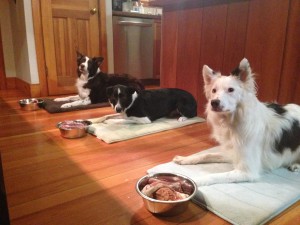 The power of impulse control!

Go in the kitchen and make yourself a snack while thinking how silly I must be to make such a suggestion. As you’re prepping your food, drop a piece on the ground*. When your dog dives for it, block him just like you learned to do with Leave It. You might have to block, unblock, block, unblock a few times but he’ll figure out he can’t eat that piece of dropped food. He’ll figure out that, hey, this is just like that training game from class! When you see that little light-bulb go off, tell him he’s an amazing boy and pet him in his favorite spot. Make a big deal about how awesome he is and mean it.

You’re on your way. Now, take out the trash. Maybe drop a McDonald’s wrapper or delicious used tissue. See your dog creeping up to steal this lucky stash? Block him. Don’t talk, don’t boss him around and certainly don’t scold him. Just block. Unblock. When you see him back off and look at you knowingly with his “I’m leaving it alone” look, giggle with delight and give him a little party of pets and compliments.

Is it beginning to make sense? I want you to start practicing impulse control during your day. Thirty seconds here, fifteen seconds there, using whatever stuff is already in your house. Reward your dog with the fact that you honestly think he’s freakin’ amazing when you can drop a piece of sausage on the floor and he stands there and looks at you patiently. I mean, make your dog feel really good about it. Sincerity is key. If you don’t have that, you can use some food as a reward or maybe play a game with him like fetch or tug.

Keep playing the game using everything you have in the house. Stinky shoes from soccer practice, dirty diapers, underwear, glasses, remote controls, Chinese food containers, [empty] prescription pill bottles. Instead of getting frustrated and trying to keep everything away from your dog, use it all for practice. Watch your dog get more and more thoughtful, biddable and happy. Watch yourself get more and more excited about training because it works and it’s not hard and, heck, it’s even fun. Watch as your guests start to comment about what a good dog you have. 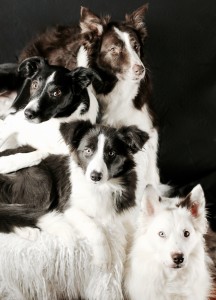 Happy New Year from PBC to you!

I also want to mention that I know that lots of you got a dog for fun and companionship and you really aren’t interested in training. That’s cool. That why we do Day Training. We can come in, train your dog, and you get to enjoy the benefits. Whether it’s reinforcing skills he already knows or teaching him new ones, Day Training is awesomely effective. Right now, we’re offering 15% off Day Training packages. Get this offer while it’s hot! It runs through February.

*If your dog becomes aggressive over food or certain items, do no practice with those. Call PBC to get advice for how to modify for dogs that have guarding issues.