If you’re like most new puppy owners, you’ve probably wondered when you should start training your baby dog. The truth is, puppy training should start before you even get the dog. Good breeders crate train, work on handling and house-training as well as other starter skills. Much like the first few years of a human child’s life, the first few months of a puppy’s life are incredibly important. Their little brains and bodies are sponges, malleable and ready to be molded and stuffed full of information.  This is the time that they learn about attachment, how to learn, how to navigate their environment and cope with frustration, fear and stress.

At any given time, there are a bunch of puppies in training at PBC. This month I’ve been lucky enough to have two puppies in intensive training that are the same age, same skill level and both with very devoted owners. Their parallels end there and I thought it’d be a great opportunity to talk to you about puppy training. Working with Sasha and Jasper illustrates the importance of training dogs when they are young, as well as the worthiness of investing a decent amount of time in their training. 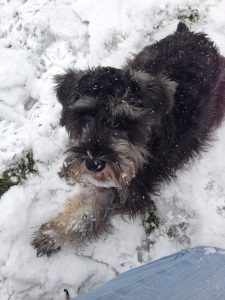 Sasha is a miniature Schnauzer that came from a breeder the owners found online.  She arrived via air transport and transitioned into her new home, a house in Amherst. with a little shyness, but mostly a lot of sweetness. She is not a baby puppy, she is 7 months old. Her temperament is that of a true wiggle-butt. She loves everyone and everything, hardly barks and is just the sweetest, most loving little dog ever.

Jasper was adopted from a shelter and now lives in an apartment in Belchertown. His owners, experienced dog people, quickly found themselves wondering why Jasper was such a challenging puppy. Also seven months old, he has adult mannerisms and attitude.  Jasper has put many holes in his owner’s hands with his sharp puppy teeth. He barks, snaps his teeth and launches at you if he’s frustrated. Where Sasha is nice, Jasper is naughty. If Sasha is sugar, Jasper is spice. Jasper is a genius Catahoula mix. 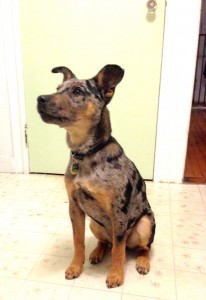 Sasha is the perfect example of the puppy you don’t think you have to do anything with. She’s such a sweetie, she’d probably grow into a nice dog without much effort. But then again, there are little behaviors that might be easy to write off that, without intervention, could develop into larger issues. She pees a little bit when strangers pet her. She jumps on visitors, practically trying to scale up a person’s body. She sneaks off and pees in the house. She huffs at strangers when she’s outside and pulls as hard as she can on the leash.

Jasper is the puppy that has so many in-your-face issues that you wonder if it’s worth it. How much can you change a dog’s basic temperament? How much of this is straight genetics? He is like a budding puppy version of Dexter (from the serial killer television show).

Yet both of these dogs are going to be fabulous pets. They will be different, of course, but as each day passes their extreme differences fade and they start to look a little like they are coming from the same place. For sure, their training plans are as different as apples and oranges but, at the same time, they are learning the exact same things.

So, what’s the plan?

Well, the first thing we did was go through managing the environment. Every young creature needs to have limited access to the world around them so they don’t develop bad habits and stay safe. Puppy-proofing includes keeping counters clean, putting the trash away, and picking up your dirty socks. Jasper and Sasha both have exercise pens, which are paneled play-pens where they have a bed, toys and water. This makes it possible for the owners to get stuff done while not having to watch the puppy constantly. Whether it’s Sasha sneaking off to pee or Jasper stealing and shredding a shoe, the exercise pen eliminates the opportunity for bad behavior. Do you feel guilty for limiting a puppy’s freedom? Well, don’t. Too much freedom for an immature pup is scary, stressful and a recipe for trouble.

Both pups are learning how to control their impulses and deal with frustration. Sasha wants to run away because she’s mortified at the concept of disappointing her people (yes, that’s highly anthropomorphic but in this case also obvious and true). Jasper has a belief system that if he can’t get what he wants, the next step if using aggression as a means to an end. Both dogs need to learn to trust people to be predictable and safe so that fleeing OR fighting are unnecessary. Here are two quick clips of what this looks like. Notice the stark difference in how they deal with frustration. 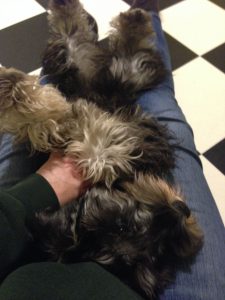 This is Sasha in a puppy hold in my lap. I’m sitting on the floor with my legs extended. Normally I use two hands but in order to take the picture, one hand is holding my phone. However, you can see how relaxed she is to stay there with just one hand resting on her chest.

We are also doing extensive handling work with both puppies. For Jasper, this is single-handedly changing his entire behavioral rapport (for the better). I believe it’s literally rewiring his brain. By using specific puppy holds where we wait until he offers calming signals, he is learning to calm himself down and trust people. It’s teaching him to be a sweet puppy instead of a tasmanian devil. I’ve told his owners many times that Jasper will spend the majority of the first year of his life in a puppy hold. Trying to do this work with an adult dog is so much harder. Physically and mentally it’s overwhelmingly exhausting. I cannot emphasize enough the value of this hands-on work as well as the importance of doing it right. It’s not about man-handling or ‘dominating’ a puppy, it’s assisting in a developmental milestone that is crucial for your pup to handle frustration, trust people and learn to calm down quickly and efficiently. 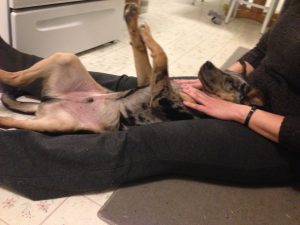 Jasper is in a puppy hold with his owner. His eyes are soft as he relaxes. This is our 4th week of practice.

So, what about skill training? Here I am talking about exercise pens, impulse control and handling work. Where’s the regular stuff like sit, down and come? It’s there. Using a mark and reward system (clicker with Sasha and verbal marker with Jasper) they are practicing lots of obedience skills. They practice before coming out of the crate, before going outside, before and during playing games and during meal times. From the get-go, we’re working on integrating obedience into real life so these dogs don’t grow up to be the dog that ‘only does it when there is a treat’ or ‘does it perfectly… when he wants to’. These puppies are learning that listening to their owners is not just for fun, listening is how they get access to the things that matter most. Their owners are incredibly relevant to them, they are the bridge between the puppy and whatever it is the puppy wants. We incorporate play, food, petting and much more into the reward system.  Proper puppy training means you get an adult dog that listens the first time you ask for something, listens regardless of food being present, listens in highly distracting situations and generally listens so well that it seems effortless. Listens in the way that guests remark on how well mellow and well-behaved the dog is. Yeah, well, that’s not accidental. That’s because of early puppy training, consistent puppy training.

Training puppies is super fun and always entertaining. They learn so fast and are delighted when they realize they can make things happen (offering behavior in order to get rewards). It’s amazing to watch their little brains grow and get hip to the training game. One of the biggest mistakes I see in training in thinking that puppy training is the EASIEST type of training. No, no, no! Puppy training is an art. It’s assessing the basic bones of who the puppy is and putting the puppy on a very individualized path to become the best dog he or she can be.

There’s so much more involved in puppy training. Socialization with dogs and novel stimuli, grooming, veterinary exam practice, food bowl sharing…but we’ll save that for another time. I’m sure Jasper and Sasha have more stories to tell you in due time.