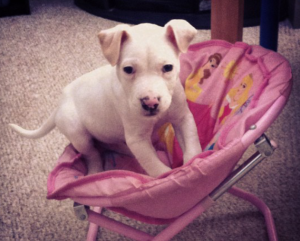 When I first agreed to a foster a behaviorally-challenged puppy for a local shelter, I got a lot of people asking me questions. Questions like, “How could you possibly do that kind of thing?”, “How can you risk your heart like that?” Truthfully, a big part of it was kind of a science experiment for me. Learning about puppy behavior, especially abnormal puppy behavior, from that early of an age firsthand. As a dog trainer in training, how could I pass up that kind of opportunity? It wasn’t completely selfish, though. I was very interested in trying to modify that little monster’s behavior enough for him to actually be suitable for adoption. I even grew to love him.

What you have to know about getting into behavior fostering is that no matter what, there is a loss that happens. If I had been unable to “fix” that little guy, he might’ve been euthanized.  A behavior foster is a very unique situation where, for whatever reason, the dog has presented with severe enough issues that the shelter does not feel they can safely and responsibly place him in a home. With the kinds of behavior problems he came with at 5 weeks old, I would not have disagreed with that decision. I don’t think anyone adopts a dog to become enslaved by his neurotic attention seeking behaviors, or separation anxiety, resource guarding, arousal issues, and his knack for aiming his bites at faces. Only behaviorists and trainers adopt those dogs, and the dog would have such a poor quality of life if he lived in a shelter long-term. If he was malleable enough for my training to help him learn to be a good dog, he would be adopted out and I’d lose him anyway. Loss is difficult, and like I said, I did come to love him. Keeping him crossed my mind briefly, but not only did some very good friends talk me out of it, my current dog did, too. He was not a good match for my lifestyle or my resident animals. Losing him was my only option.

I picked him up from my boss’s van, nervous and excited to see what he would be like. He screamed the whole ride home in his crate. The next few weeks would sure be interesting. That night, I had him on my bed with me when I thought he was tired. I brought a rope toy up with us in case I needed to redirect inappropriate mouth usage. Well, at one point in his very short first bed experience, he got very frustrated with me for not allowing him to have his toy. With his lack of frustration tolerance, the first thing he did was launch a bite at my face. From then on, the rules were very strict with my little “Gator.” We worked very hard, to his dismay, at tolerating frustration and learning about “off buttons” when arousal got too much for him to handle. Especially at around 7 weeks when he started to act more like a pit bull puppy and less like a weird little duckling with not much personality, he really needed a lot of guidance. 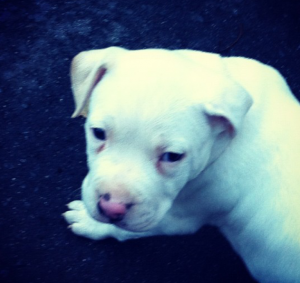 My poor Fiona is a selectively tolerant 4 year old Akita. She has been very accustomed to getting all of mom’s attention since the day she came home at 8 weeks of age, but she was very willing to accept this odd little pig puppy into her life. At first, anyway. She definitely taught him a lot about fair play, but when he started to jump up and bite at her face, she was done. She would hypersalivate when I brought him in, and was very anxious any time he was around. I had to pull him off of her many times as she would only knock him off his feet to get away for a few minutes. By the end of a few weeks with him, she didn’t even want to play with him anymore. It was very good for Gator, he needed to learn about other dogs having boundaries, and how to modify his play style instead of just rushing in with muscle and teeth like everyone was a pit bull puppy. She was so excited the first night I came home without a squealing puppy in a crate.

While I had Gator, a friend of mine fell in love with him. Much harder than I had. At that time, I was spending a lot of time around her place of employment, so she got to spend a lot of time with him, and hear about my training adventures with him. When she asked about his availability, I cautioned her about his behavior issues, but was also hopeful that he might find a forever home with someone I knew. She already had a female pit bull with some separation issues. She was an experienced, knowledgeable home. At this point, he hadn’t passed a behavior evaluation yet. I allowed myself to hope for the best, despite that fact. 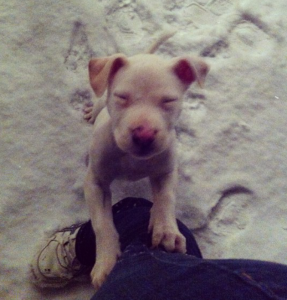 In the end, Gator became Gunner, a good pet dog who became inseparable from the other pit bull in the house. He belongs to my friend, who posts pictures of him on Facebook all of the time. I’ve gotten to see him grow into a strikingly handsome dog, and a beloved pet, as well as a fair playmate. It is a fairytale ending, and I can’t imagine anything better having come from it. I definitely lost him – when I visit, he doesn’t even barely remember me anymore. It was a loss well worth the pain.

That was the risk I took. Behavior fostering can be heart breaking, yes. But on the flip side, it can also be an incredible experience. I was always going to lose that little guy, and I know that it would’ve been a lot more painful if he had been euthanized. For me though, it would’ve been unbearable to have had the opportunity and not even try to give that puppy a chance. Especially looking back, knowing what I know now about him. He isn’t perfect, but he found a perfect home nonetheless.

You never know what a dog is capable of until he is in the right circumstances.

This was written by Laura Kuzmeski, assistant trainer at PBC. To learn more about behavior fostering, you can contact your local shelter for volunteering opportunities. 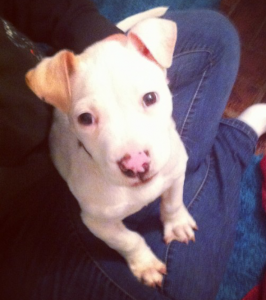