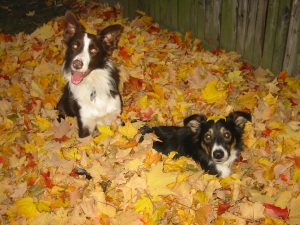 Rowan is on the left. This was one of the first pictures I took of him. He’s with Kai, playing and posing for pics in the autumn leaves.

Today, I’m telling the story of Rowan, a crazy (truly crazy!) mess of a dog who wins the hearts of everyone he knows with humor, perpetual awkwardness and good intentions.  With Rowan’s story comes a tale of what it’s like to rescue a dog from a shelter or rescue group.  I hope it will be helpful for folks either considering rescuing a dog, as well as for those that have already rescued a dog and are thinking, “what have I gotten myself into?!”.

I adopted Rowan from a rescue organization when he was 8 months old.  He would be my second border collie and first rescue dog I adopted as an adult.  I remember the day I went to get him clear as day.  I had seen him online but this was our first meeting.  All went well with the meet-n-greet and I ushered him in the car to come home and start his life with me.  I loved sleuthing through the scanty paperwork he had, I wanted to find out who he was and how he came to be in rescue. I was able to trace his beginnings back to an unfortunate puppy mill “breeder” in Tennessee.  At the time, I wasn’t familiar with how deceitful breeders could be and how truly inhumane dogs could be treated.  Rowan as born as an All American Border Collie, bred by one Richard Swafford.  In the 9+ years since I have had Rowan, the Humane Society of the United States have seized dozens of them off the property, eventually imprisoning Swafford for violating a restraining order keeping him from owning multiple intact dogs.  But that’s a story for another day.  Back in 2004, I just wanted to know who Rowan’s breeder was and whatever else I could find out about his parents.  I called Swafford and he was suspicious and gruff with me (again, in retrospect this is certainly no surprise).  Ah, but I was so naïve with the world of breeders and such! 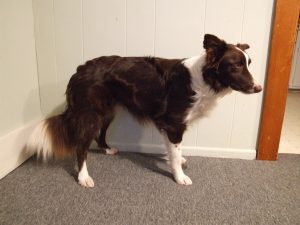 Rowan as a young dog, posing for his AKC ILP approval

Rowan was shipped to a family in Maine as a puppy.  He was surrendered to a shelter not soon after, adopted by one family, returned, adopted by another family and returned again.  He landed in border collie rescue as his fifth placement at a mere 8 months of age.  He had been named Terrance, T-Bone, and Tigger.  It looked like he had spent most of his time outside, alone.  His coat, red and white, was sunburnt to a dull coppery shade.  Multiple failed placements for a young dog are never a good sign.  Why did these families all reject him?  How bad could he be at 8 months of age?

Excited about joining the world of people who had adopted rescue dogs, I joined some online groups about rescued border collies.  I was an aspiring trainer but felt I might need some help transitioning into having a multi-dog household.  I eagerly read the threads and soon was posting my own questions. 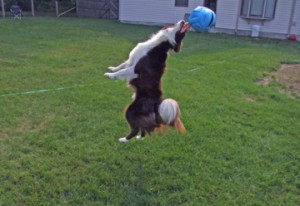 Rowan at age 5. He loves to jump and the air and flip to catch things!

The first question I posted was maybe a day after I brought Rowan home.  He was in the kitchen and, suddenly, he launched himself on my other dog, Kai, and they started fighting.  Confused about what was happening, I thought about a book I had been reading by dog trainer I respected.  She was talking about multiple dogs competing or fighting over a valuable resource and to resolve the fighting, one method was to remove the resource.  Well, in my kitchen scenario, I thought I was the resource.  So, logically, I removed myself.  Well, that didn’t work.  The fighting continued and my mother ran in and physically broke it up. (none too happy with me)!  I was completely at a loss.  So, I posted my bewilderment and confusion on the border collie list.

I received some great advice from knowledgeable folks, advising me that as the owner of multiple dogs, it as my job to step in and manage their behavior to keep them safe.  Also, that with Rowan being such a new addition, how important it was to go slow and let everyone adjust in a controlled manner.  I also received a private email from the head of the rescue organization, reaming me out.  She was furious with me for embarrassing her.  Basically I had made her look bad with my ignorance.  I was initially shocked into tears.  I had no idea what I had done wrong.  I had asked for help and had been trying to do the right thing.  Well, this was my first lesson in dealing with the sensitive egos of the rescue world.  People that dedicate their lives to animals are passionate and amazing people.  However, this doesn’t always translate into having good people skills.   I also had no idea how close-knit rescue groups can be (someone on the list figured out I must’ve adopted Rowan from this woman’s organization and forwarded my post to her).  After being shamed and basically yelled at, I spent some time just feeling awful about what I’d done.  But then, with time, I became angrier and angrier about how I had been treated.  It was an unfortunate incident.  I am a sensitive person and this drove me away from online lists for years.  I am still cautious and tentative about what I post, worried that it will rub someone the wrong way and I’ll get lambasted again.  I eventually got an apology but I always carry a little extra compassion for new adopters that publicly announce their mistakes without even realizing it. 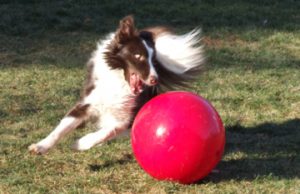 Rowan put the ‘crazy’ in the saying he’s ‘crazy’ about that Boomer Ball!

As it turned out, Rowan was guarding the trash in the kitchen.  After that first fight and my online experience, I was super vigilant about monitoring Kai and Rowan.  No more fights but then I started to see something weird with Rowan.  I would see him pouncing like a cat on the ground and tap, tap, tapping his paws.  His expression was glazed over and he was totally unresponsive to me.  I certainly wasn’t about to post online about this bizarre behavior.  I researched and read what I could find, eventually finding the name for the behavior: shadow chasing.  I’d never heard of such a thing!  It was an actual diagnosed condition called Canine Compulsive Disorder (CCD).  Seriously?!  My dog was obsessive-compulsive?  But, indeed, as Rowan settled in he became more and more fixated on chasing shadows.  He would bite at sunbeams, pounce on the shadows on the ground…something like a laser light would send him into a frenzy.  He would search for it for hours.  Rowan’s CCD deserves a blog all its own.  He also has separation issues, dog-aggression and severe thunder-phobia (again, stories for another time). 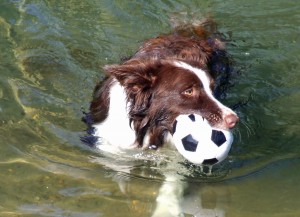 Perhaps one of the purest joys is watching a rescue dog develop much-needed attachments and learn to love and play in a new home.  At first, Rowan had no interest in toys or chewies.  He simply had no idea what they were and was somewhat scared of them.  He had no confidence. He never dared to try new behaviors.  This is a dog that had probably lived outside for the first 8 months of his life.  Maybe mistreated, maybe not…but definitely not loved or provided with enrichment.  So, as the months went by it was incredible to watch his delight and joy when discovering he could eat a bully stick or catch a Frisbee.  He learned how to have FUN.  What an amazing process to see and it still brings tears to my eyes remembering how amazed and sweet he looked as he had these mini-epiphanies about it being OK to play with toys and eat treats.  Probably one of the happiest moments for me was the day he rushed upstairs with his Kong, only to enthusiastically pitch it down the stairs to that it bounced and all of the treats fell out.  He did this over and over again and his creativity, his joy, his enthusiasm was completely heart-warming.

Because of Rowan, I learned about the absolute gift we can give to a dog by rescuing him or her from a shelter or rescue organization.  I learned that rescue groups can be narrow-minded in their fanaticism with their mission.  And while it is a product of good intentions and a passionate love of animals, it can also be very hurtful to inexperienced and naïve people looking to rescue a pet.  I also learned that there is also an incredible amount of support and kindness available for new pet owners.  The internet is a powerful tool and because of it I ended up connecting with rescue and shelter folk that literally changed my life with their dedication, knowledge and kindness.  I started out as an inexperienced, young trainer and because of my precious Rowan and the road he helped me travel, I have been working closely with shelters and rescue groups ever since.

Rowan is almost ten years old now.  Of my four dogs, he is perhaps the most loving and loyal.  He is the only one who barks protectively when he perceives a threat is being made towards me.  He has matured in a “grandpa” dog.  He shows infinite patience with the puppies and insecure dogs that I work with.  He is gracious and generous with all dogs he shares his home with.  Although I know that none is this is technically because he’s a rescue, it still warms my heart to watch him.  He is a constant reminder of the power of love, compassion, kindness and the importance of accepting the individual quirks we see in others. 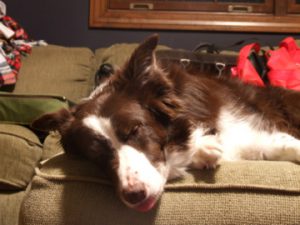 One of the things I love most is his little tongue sticking out when he sleeps.