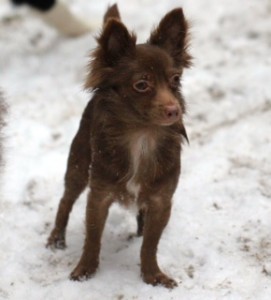 Today I am writing what feels like a very sad story. A story with conflict and heartbreak. It is the story of me returning one of my dogs to rescue. But in order to understand how I got to this moment, let me start at the beginning.

When I first started working in  animal shelters, my boss had two small and adorable Chihuahuas. One, in particular, had me completely smitten. She wasn’t particularly friendly so I couldn’t pet her but I would watch her from afar and admire her feisty attitude and extreme cuteness. It was then the seed was planted for me to one day have my own chihuahua.

Years passed, and it was never the right time or the right dog. That is, until this past summer. That’s when, on a fluke, I found Willow. Instantly, I fell in love with her through her picture on the Internet and made immediate plans to visit her in her foster home. The stars were aligned; I made arrangements to visit her and was able to bring her home all within one day. Some would say that my decision was impulsive but when you’ve been harboring a desire for a little Chihuahua for over five years it hardly feels impulsive.

Willow joined my four border collies with complete comfort and ease. Although she was very timid with new people, she could not have been cuter. She would run with my dogs and get in the mix as good as any big dog. She was a little toughie! And at the same time, she was dainty and tiny and simply a little speck of sweetness. Having Willow made my household feel complete. She added humor and playfulness that my intense border collies desperately needed. She poo-poo’ed their rules about personal space and just cuddled with them and got them to play with her through mischievous and sweet persistence. 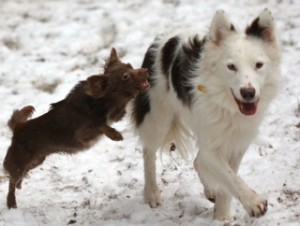 Willow was a great addition in so many ways. She is a fantastic dog. She is also very sensitive dog. Obviously, at the mere 7 pounds I always felt protective over her. And as the months went on, I began to have some experiences that caused me grave concern. First there was the phase that my cat went through where he thought it was a fabulous idea to chase Willow and swat at her playfully. Her frightened eyes were as huge as could be and she would simply squeak and roll over on her back, exposing her naked belly. Not the response I was hoping for as this excited my cat even more. But we worked through that. Then there was Kai, my cranky older border collie who doesn’t like dogs coming into his space and will snap and show his teeth to emphasize the point. He never snapped at Willow and I felt that he understood how tiny and innocent she was. Also, there are the dogs that I board at my house. Many of which saw little Willow as nothing more than a warm, squeaky toy.

Then, I heard about a tragic incident with my old boss (the one with the Chihuahua so many years ago). She lost one of her little dogs because of an altercation involving a bigger dog. This was right on the cusp of my own terrifying experience of almost losing Kai because he choked on a piece of meat. And yet another friend lost her beloved dog because of two innocent events occurring at exactly the wrong moment. It had a fatal outcome and has broken my friend’s heart.

Being responsible for another living creature, whether it be a child or a pet, is a huge deal. Every moment of every day we have to make decisions about what freedoms we can allow. We have to let go and permit freedom and spontaneity and just live.And how do we determine where the line is for what is overcontrolling and constraining versus irresponsible and careless? Is it stupidity or bravery to move forward in life without micromanaging everything our little charges do? 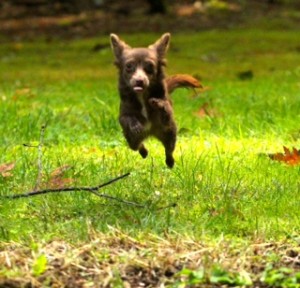 In this case, I decided that keeping Willow was just dancing with the devil. The conversation changed from if she would get hurt to when she would get  hurt. And I know that it was just foolish to think that certain behaviors I saw, like Kai with his growling, would never escalate. It was only last October that I stood in the kitchen handing out chunks of pot roast thinking that, hmmm, these pieces are pretty big. And not even five minutes later I was laying in my backyard with a dead dog in my arms. This year has taught me to pay attention to the little red flags and cautionary thoughts that I have. In addition, the dramatic after-effects of going through resuscitating Kai have made me much more fragile. I don’t know if I could recover from seeing sweet Willow mangled or hurt because of my naïveté.

Still, there is the guilt. There is no getting around how awful it feels. Returning her to rescue makes me feel like I have abandoned her. It makes me feel like I am being judged for not being…I don’t know…strong enough or loving enough. Like I am giving up. I talk to clients all the time about not just keeping a dog because they feel like they have to. Keeping quality of life in mind when making decisions about the best interest for the dog is so important. Doesn’t make it any easier to know that, though. I still feel like I’m going to throw up, I’m crying, and it just hurts.

Another part of my job is working with local rescue groups around taking dogs that can’t stay in the home for one reason or another. And sadly, for every pet owner that is wracked with guilt and sadness about not being able to keep their pet, there is a rescue group that is judging, chastising and making it even harder. I am very fortunate that Willow’s rescue is the exception. They are the type of rescue that everybody should be blessed to be able to work with. Responsive, compassionate, understanding. On my end, making the decision was a long and difficult process. But once I contacted them with my decision I was ready to move forward and, honestly, it was heartbreaking to keep Willow with me. Within one hour of emailing them, they responded and help me coordinate a plan to get her into a safe and loving foster home. This is amazing.

So this is my story today. I am driving home from delivering little Willow to her foster home. Despite knowing that this is the happiest possible ending for both her and me it still breaks my heart. She is a precious little dog and I already miss so much about her. I will have to keep telling myself that she will make someone very happy with all of her joy and sweetness.

When I finished writing about Kai choking, I concluded by advising that everyone tries to be prepared for emergencies. Sometimes things happen and it’s important to know what to do. But with Willow, it was about being proactive and thinking about what was best for her and not clouding it with my own emotions. Maybe it sounds a little backwards, but I feel like if I had kept Willow that would’ve been the most selfish thing I could’ve done. If I was too scared because I might be judged or criticized for my decision and thus kept her to avoid that, well then, that would’ve been risking her safety for cowardice. If she had gotten hurt as a result of my lack of action I never would’ve forgiven myself.  Every day we have to make decisions about what is right for us and the ones we are responsible for.  I have a deep respect for that process and place no blame or judgment on the different paths we choose.  We can only learn and continue to love, making the choices we believe are best.

Today is a somber day.  But I hope that as we enter the new year, we all find safety and peace.  And let’s all hope that little Willow finds her true forever home, where she can light up the hearts of her people.

Here is a video of Little Willow.  If you or anyone you know is interested in adopting this precious girl, please contact New Hampshire Small Dog Rescue at 1-787-808-3523 or email Bonnie Vendig at bonnievendig@yahoo.com. 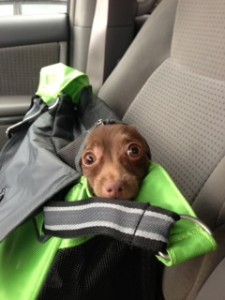