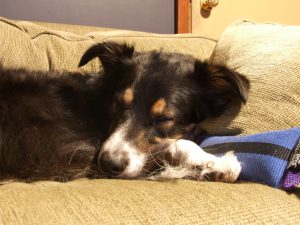 The other day I saw a great link shared on Facebook for a blog post about reactive dogs, at Bull in the City. Almost nine years ago when I brought home Kai, my border collie that was reactive to people, resources like this were practically non-existent. I felt so alone, so completely out of my element. Like many people, I had owned dogs growing up. Dogs that hung around the house in a peripheral way. I played with them and trained them as a whim or hobby, much the same way that I played doctor or had tea parties with them. They had issues, they sometimes ran away or got in fights, but that never really seemed to matter. So, when I got my first dog as a ‘grown-up’ I expected him to go everywhere with me with total freedom, obedience and joy.

I had developed what I’ve grown to call my Lassie Complex. My expectations and idealistic notions about Kai were deeply embedded in how I saw myself and envisioned my life. So, when Kai started challenging me with behavioral and veterinary issues, I was just completely slack-jawed, overwhelmed and confused. I tried to catch the curve balls. I clicker trained him, didn’t use punishment, vigilantly researched his problems and tried to connect myself with people that could help. But, in retrospect, I was operating through a constant haze of my Lassie Complex. Here’s an example. I took him to the vet to confirm his diagnosis of osteochondritis dessicans. I was clicking him for any semblance of calm behavior, awkward with my treats and clicker and the tension in the exam room. The vet told me I was rewarding my dog for bad behavior. My respect for his veterinary expertise, my shyness about what I was doing and my natural tendency to avoid confrontation practically made my head explode. I was only able to focus on so much and, to me, I was trying so hard to do the right thing. Yet, at the same time, I allowed someone who didn’t know my dog to make me feel awful about how I was handling matters. Worse, my trepidation and anxiety with the situation blocked me from properly advocating for what Kai needed in that situation. But, you know, when you’re unfamiliar with the new tools you’re using it can be really freakin’ hard to pick the right tools. I was stumbling along trying to use a new language ( of understanding dogs) in a situation that demanded fluency when I barely knew my ABC’s.

Kai and I grew – and stumbled – together. I devoted myself to his rehabilitation and progress. I invested in his surgery and physical health, I learned so much about behavior, training and enrichment that I ended up becoming a trainer myself. But the biggest gift I gave to Kai was losing the Lassie Complex. After six weeks of crate rest as a post-operative requirement, we were starting our short leash walks. He was barely a year old and it was winter, although no snow had fallen yet. As we circled around the neighborhood and came back towards the house, he misjudged a hand gesture I made – thinking that I was asking him to jump up to nose touch my hand. He launched off the ground, twisted in the air and fell, landing hard on cold pavement. Kai cried out in pain and stood up but was unable to walk. Well, that was it for me. I sat down on the curb and just started bawling. I could not go through anymore, I was financially and emotionally exhausted. And I could not stomach the idea that despite everything I had been doing, I was still failing.

Well, it was the best thing that could have happened. All my ideas about what Kai should and would and could be doing fell away with those raw tears I shed. I stopped trying to make Kai like people and I started listening to Kai about what was ok with them and what was too much. I stopped panicking about NOT SOCIALIZING him and instead focused on having fun and building the relationship without any pressure. Basically, I lost the hazy film of believing that somewhere in Kai, there was a Lassie waiting to be unleashed. I just let him be Kai.

Kai truly became the Dog That Changed Everything. He continues to teach me and help me be the best behavior consultant and trainer that I can be. If not for him I would not have my business, my house, or the intense joy I derive from helping others find harmony with their pets. And Kai? Well, he trusts me enough to go into any situation I ask. His fear of strangers is virtually unrecognizable – teenage boys have tousled his fur, UPS men have hugged him when I wasn’t looking, and I could go on. But I respect his limits and no longer have any desire to make him into someone he’s not.

I have many reactive dog owners as clients that struggle with the Lassie Complex. I see them implement my protocols and suggestions with great dedication… but at the same time they are still exposing the dog to situations that are way too overwhelming and over threshold for the dog. I know the frustration, I know the total heartbreak that happens when they fall apart and you think, “will this EVER get better?”. Owning a reactive dog isn’t for everybody, I often joke that no one gets a dog so that they can consequently spend thousands of hours and dollars on training and management. Obviously, there is no replacement for the hard work, conditioning exercises and training that is necessary for progress. But I would also assert that it is equally important to let go of the Lassie Complex. Just stop for a second and look at your dog. Listen to her, enjoy the nuances of her personality. It will provide you with clarity, compassion and the ability to be present and better understand your dog. With that comes the potential for a deep, powerful connection that would make any Lassie fan green with envy (and hint: that’s when the best training progress happens as well)!